Phallic fascination is nothing new— the Ancient Roman Empire was dotted with penises everywhere.
Recently, historical researchers have found 1,800-year-old wall carvings in a quarry, near a section of the Hadrian’s Wall in England, apparently belonging to Roman soldiers (207 AD).
What have researchers found, exactly? 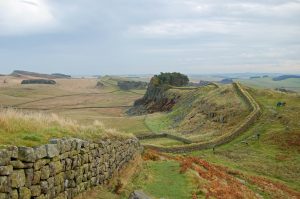 Hadrian’s Wall, also called Roman Wall or Vallum Hadrian in Latin, was a barrier built up by Romans to protect from barbarian invasions. What remains of the original wall is millennia old, with many engravings, such as an office commander’s caricature and penis etchings.
According to historical researchers, the phallus was used as a very common symbol of good luck by Romans. These engravings help researchers to get an insight into the Roman soldiers’ lives.
Erosion is playing an increasingly complex role in visual interpretation but the experts will use laser-scanning technology to get detailed recordings of the markings.

Do you want receive other curiosities or news? Subscribe to our newsletter.
Or if you like Italy and you want to know some more about Ancient Romans book our UNTOLD HISTORY TOUR ‘Homoxesuality in Ancient Rome’