After being shot with arrows …

…St. Sebastian was portrayed as a semi-nude handsome young figure putting to death.The history says that during the Black Plague St. Sebastian was invoked against pestilence. While he was dying the torturers confessed their love to him out loud because of his beauty. He was a Roman soldier who was convicted of helping prosecuted Christians and condemned by his friend, the emperor of the these times: Diocletian.

In that way, he has been considered as a gay icon by many homosexual artists during the Renaissance.

With the Untold History Tours of the Vatican Museums you will be able to see the paintings of St. Sebastian. Book Now or contact us for further information at booking@quiiky.com 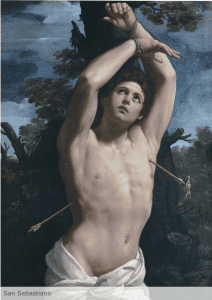