History and useful information on an evocative hamlet, not too far from Rome

Close to Rome and Bracciano Lake, on the top of tuff hill, in an amazing unspoiled area, a desert hamlet: the ruins of old Monterano… here you travel back in time.

Indeed, you can discover traces of a magnificent and mysterious past: the Roman aqueducts and the Etruscan tombs as well as the amazing San Bonaventura monastery (Renaissance age). In front of the church, the replica of the beautiful Bernini fountain (the original one is in Piazza del Campo, in Canale Monterano) and the Lion Fountain always by Bernini. 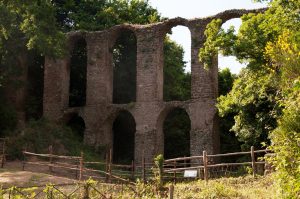 Monterano has been a human settlement since the Bronze Age and grew during the Etruscan Age. During the Roma Age regained much of its power. The structure in the centre of Monterano is the castle, that was redesigned in the Baroque age. In 1679, Prince Altieri commissioned Gian Lorenzo Bernini to remake the fortress, transforming it into an amazing palace with a fountain featuring a lion statue on top, which has become symbol of the city. In the same period, Mattia de Rossi built the San Bonaventura’s monastery, still visible today.
In 1799, the town began its decline. The French army sacked it and after that the malaria followed. Because of these disasters, the citizens of Monterano simply left! 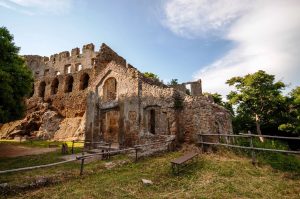 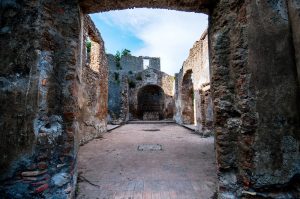 This ghost city is not too far from Rome, is surrounded by a natural scenic beauty inside the Monterano Natural Reserve. Several movies were shot here, such as Mario Monicelli’s Brancaleone alle Crociate and Il Marchese del Grillo, and Marco Bellocchio’s ‘La visione del Sabba’ and others.

So if you are visiting Rome, take a short break away from the city for a journey back in time!

How to get to Monterano:

Get in touch with Quiiky Tours (boking@quiiky.com) for more infos and in order to organize your special gay trip to Monterano